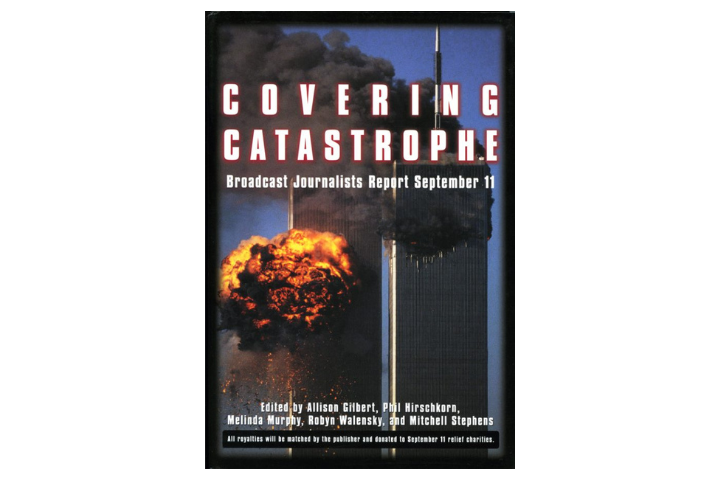 1. You’ve made a big announcement about Covering Catastrophe. What’s going on?

Timed to the opening of the National September 11 Memorial Museum, I am very proud to announce all publishing rights to Covering Catastrophe have been legally transferred to the Memorial & Museum. Proceeds will support the museum’s programs and exhibitions in perpetuity.

When Covering Catastrophe was first published my co-editors and I donated our royalties to the Broadcast Engineer Relief Fund, benefitting the families of the broadcast engineers killed in the World Trade Center attack, and the Citigroup Relief Fund, providing scholarships to children whose parents were killed on 9/11. We’ve always had the same two goals for this book: giving back and making sure this tragic day is never forgotten. Our partnership with the Memorial & Museum helps ensure both objectives, and I couldn’t be more thrilled.

I was nearly killed on September 11 and the emergency triage tag put around my neck is on display. The triage tag is located inside the September 11, 2001 exhibit, installed next to a plaque describing what it was like for me to cover the attacks for WNBC-TV. The tag is part of a small group of survivor artifacts. The WNBC-TV press credential I wore on 9/11 is part of the museum’s permanent collection.

I was also asked to record my oral history for the museum and that recording is now available to visitors, historians, researchers, scholars, and authors. I’ve also lent my voice to the museum’s official audio tour, narrated by Robert De Niro.

After the second tower collapsed, I was buried under rubble and taken by ambulance to Bellevue Hospital. Nurses and doctors in the Emergency Room cut off my clothes and tubes were put down my throat to help me breathe. I was sent to the World Trade Center to cover the story. Remarkably, my injuries weren’t serious and I ended up doing a phone interview with anchor Chuck Scarborough from my hospital bed.

4. What is Covering Catastrophe about?

Covering Catastrophe chronicles the events of September 11 through the first-hand accounts of the broadcast journalists who covered them. These recollections are raw and compelling and provide a historically accurate look into what professionals in radio and television experienced that day.

5. Will I know any of the contributors in the book?

6. Why did you write Covering Catastrophe?

Like many journalists who covered 9/11, I had a difficult time putting the tragedy behind me. The images I saw and the sounds I heard haunted me for months and I couldn’t shake them. Ultimately, a friend recommended I write down everything I experienced, and it helped. I imagined other journalists would benefit from the same opportunity. The book would not have been written, however, without my partners: Phil Hirschkorn, Melinda Murphy, Mitchell Stephens, and Robyn Walensky.

7. Is Covering Catastrophe suitable for children?

Yes. It is important that older students learn what happened on 9/11 and who better to learn it from than the men and women who reported what they heard and saw that day. These seasoned journalists (including many critical players behind the scenes) were eyewitnesses. Covering Catastrophe takes readers behind the scenes of one of the most important days in U.S. history.

8. There are a number of books about September 11. Why should I own this one?

Covering Catastrophe is the definitive record of how broadcasters performed their jobs on September 11. It’s also the only 9/11 book turned into a documentary by the U.S. State Department and distributed to embassies and consulates around the world.