17 Days and Counting: My Journey to Prevent Ovarian Cancer 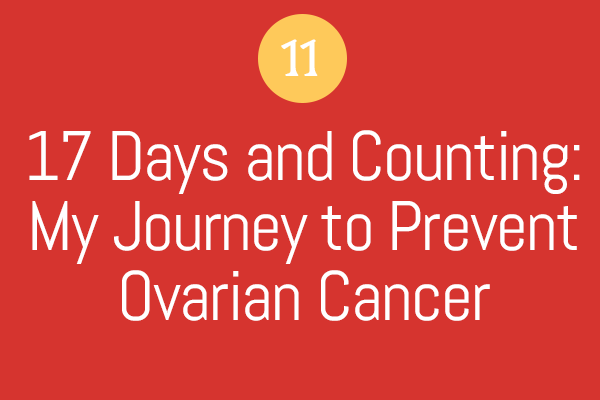 My aunt called me the other day from Oregon and crushed me with some unexpected news. She told me she was canceling her plans to come to New York for my surgery.

I reassured her that I’d be fine and that I understood. And I do, intellectually. But it’s easy to lie on the phone, and in truth, I felt abandoned. She offered explanations and apologies but her words dripped uselessly out of the phone. I started to cry and ended our conversation before she could hear me get too upset. What more was there to say, anyway? I put down the phone and shrieked in anger and disbelief.

Ever since I began contemplating having this surgery, my aunt – my mother’s sister — promised she would be there for me. She’d hold my hand. She’d make sure I was OK. There was great comfort knowing that she’d be the mother I no longer have worrying about me while I’m in the operating room.

I realize I’m being whiny and juvenile and my aunt has a very good reason for not coming. She recently moved to Portland – and after months of looking for work – she finally found a great job. I know she couldn’t have accepted it and immediately flown across the country to babysit her niece, who’s not even sick, in the hospital. I know it, yet I so completely longed to be the center of her maternal affection and attention.

That’s what’s so hard about not having either one of my parents anymore. At 37, I still want to be somebody’s baby.