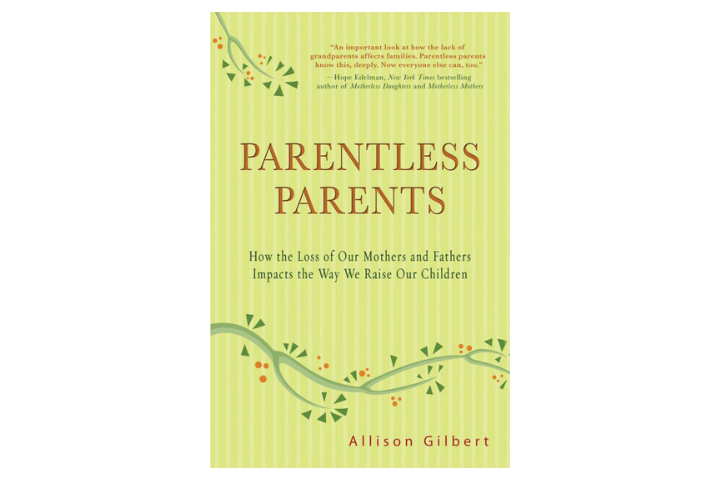 1. What is a parentless parent?

Parentless parents are mothers and fathers whose own parents have passed away. For example, both of my parents died by the time I was 31 and I have two children. I am a parentless parent.

2. Why did you write this book?

The absence of grandparents impacts everything about the way mothers and fathers raise their children — from everyday parenting decisions to the relationships they have with their spouses and in-laws. My children never met my mother, and my father died when my son, our oldest, was just 18-months-old. Not being able to share my children with my parents (and my parents not being able to share themselves with my children) has been the greatest challenge I have faced as a mom.

This is the term I use to describe the specific losses experienced by parentless parents. “I” stands for irreplaceable. We could read every parenting book in the world and still never learn what we really want to know as moms and dads.

Our parents can’t pass on family traditions. They can’t share stories about living relatives or ancestors. And it’s impossible for them to tell us how we behaved at certain ages and stages. If we had even one parent, there would at least be the possibility that some of that information could be passed along directly. Not being able to ask our parents questions is one of the most difficult parts of being a parentless parent. Why does this matter? Let me tell you a brief story.

When our daughter, Lexi, turned three she started to stutter. She didn’t care, but my husband and I were worried and heartbroken. It was painful hearing her stumble over the simplest words. For me, what made it worse was that as a child I also stuttered and I had no recollection of how my parents helped me. Did they take the “wait and see” approach as Lexi’s pediatrician recommended? Or did they whisk me off to a speech therapist for immediate intervention? Whatever they did, it worked. Mark and I ended up choosing the aggressive line of attack, and Lexi stopped stuttering almost immediately. Perhaps we would have reached the same conclusion if my parents had been alive, but the scare would have been easier to handle if they’d been there to help us along. I could give you countless examples, many a lot more urgent than this.

There are other components of the “I” Factor as well. One of the most important is that parentless parents seem to have less physical and emotional support than other parents. As a result, many mothers and fathers report feeling that their happiness is never truly complete and being frequently jealous of friends who still have parents.

Researchers have long studied the influence that grandparents have on grandchildren. Through extensive study over the last twenty years, scientists throughout the United States and the world have determined that grandparents help shape virtually every aspect of a child’s social, cognitive, and emotional development.

Grandparents often pass on their love of art, books, and music. They teach skills related to their jobs and interests. Grandparents tell stories about their past and the lives of family members. And particularly important as children enter their teens, grandmothers and grandfathers provide a safe and treasured refuge away from parents.

What became fascinating to me as I dug more and more deeply into this field of research is that I couldn’t find a study that specifically explores how the absence of grandparents, or having fewer of them, impacts children. If you examine the power of a particular kind of relationship, should you not also investigate the lack of it? The cumulative lack of these grandparent-led influences is the “Grandparent Gap.”

5. What kind of research did you do for this book?

I conducted dozens of in-person interviews, led focus groups in Los Angeles and New York, and launched the Parentless Parents Survey, the first of its kind, which received nearly 1,300 responses from across the United States and a dozen countries. In addition to talking with others, I write extensively about my own experiences and sought the analysis of experts in various fields, including parenting, psychology, marriage, and grief counseling.

6. What is the most surprising pattern you discovered researching and writing this book?

I was shocked to learn how deeply relationships are impacted when one spouse is parentless and the other is not. In the Parentless Parents Survey, respondents say they receive nearly double the amount of emotional support from friends who have also lost their parents than their own husbands and wives, and nearly half of all respondents say they get jealous when their in-laws spend time with their children. Happily, I’ve learned several effective tools for easing tension between spouses and maximizing the support they give each other. The best advice is included in the book.

7. I’m confused. How does being a parentless parent impact marriages?

I think my husband and I are good examples of this. Mark’s parents are alive and they are wonderful in-laws and loving grandparents. I am so very lucky to have them. But because my mother and father are gone, my children’s sense of family is completely lopsided. Sometimes just the physical presence of Mark’s parents — and the disproportionate representation of their interests and values — has the potential to marginalize what I bring to the parenting table.

The widespread ripple effects are easy to imagine. You might feel self-conscious hanging Christmas stockings if your spouse (and his or her entire family) celebrates Chanukah. If your parents believed kids shouldn’t watch a lot of TV and your in-laws have the television on every time your children visit, you may feel like you’re swimming upstream, especially if your spouse follows his or her parents’ example at home.

The fact that Mark has parents, and I don’t, can make me feel out-influenced. Sometimes in the past I’ve pushed Mark’s mother and father away just to regain some equilibrium.

8. Is there anything positive that comes from being a parentless parent?

Absolutely! Whether it’s empowering children to have a greater appreciation for life or providing open lines of communication to talk candidly about death, parentless parents are uniquely equipped to use their experiences of loss to their children’s advantage. Loss can make us better parents and our kids more empathetic, caring, and resilient children.

9. What are you hoping readers learn from Parentless Parents?

For years, I felt alone. The deaths of my parents changed everything about me and completely informed the way I raise my children. I had trouble coming to terms with my emotions and didn’t feel like anybody understood what I was going through. From writing this book, I’ve come to realize that many parents feel equally isolated and I hope the book provides some measure of comfort. I also hope readers join Parentless Parents on Facebook and, if they’re so inclined, a Parentless Parents chapter. My sincerest wish is that readers understand that they are not alone.