Jon Stewart on Grief, Resilience, and Supporting Those Who Serve Others 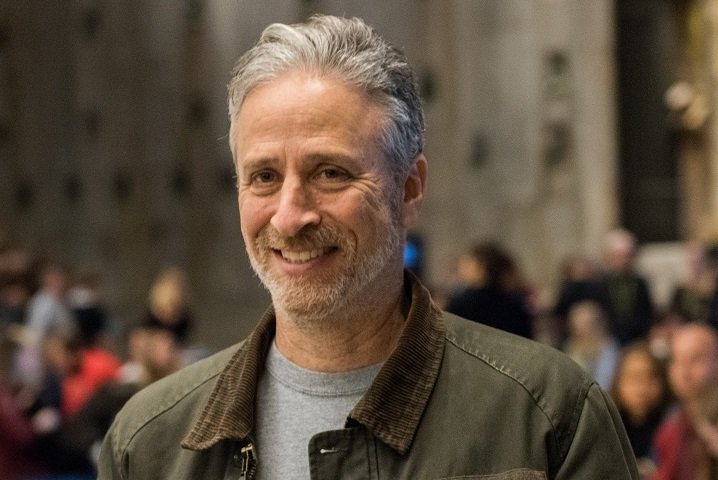 Jon Stewart’s father passed away several years ago. But the former The Daily Show host’s personal experience with loss is not what prompted our discussion for my grief & resilience blog. Jon and I were in Arlington, Virginia to join Presidential Medal of Freedom recipient and founder of TAPS, Bonnie Carroll, for the launch of the TAPS Institute for Hope and Healing. Also with us were authors Hope Edelman, Claire Bidwell Smith, and Rebecca Soffer. Read more about this pioneering organization and its new Institute here.

Jon is a staunch supporter of service members, veterans, and military families. He is also a tireless advocate for first responders and is credited with being a driving force behind getting Congress to pass the James Zadroga 9/11 Health and Compensation Act.

The Zadroga Act provides health care and financial support for 9/11 first responders. These men and women breathed in toxic dust and smoke during the massive cleanup at Ground Zero. According to John Feal, founder of the FealGood Foundation, more than 7,000 first responders have developed cancer (as certified by the government) and nearly 2,000 have died.

Jon has spoken at Iraq and Afghanistan Veterans of America and USO events and he’s visited with troops overseas. Most impressively, he’s used his singular platform to hold America accountable for the care of those who have served and suffered.

Our conversation was intimate and far-reaching. He also spoke with WTOP radio and Connecting Vets about the significance of the new Institute. Below is an edited compilation of the most important portions of these discussions.

Allison: Why have you chosen to talk so openly about grief and resilience?
Jon: Grief and illness are really isolating when they occur. Unfortunately, when people go through tough times many choose not to reach out for help or don’t know what to do. There’s so much confusion. Individuals may even wonder if they’re grieving the “right” way. [Note: there is no “right” way to grieve that works for everyone.] And while everybody experiences loss, too few know how to grieve so they can hold tight to their loved one’s memory while making the best of the time they still have in front of them. (You can learn 85 strategies for honoring and remembering family and friends by reading my book, Passed and Present: Keeping Memories of Loved Ones Alive.) Sadly, this is one of those fields where TAPS has an incredible wealth of experience and compassion.

Allison: What inspired you to lend your voice to the launch of TAPS Institute for Hope and Healing?
Jon: I’ve done a bunch of work with the USO and military families at Walter Reed and Fisher House. I’d become aware of TAPS through that. Yet even amongst injured or ill veterans, there is a separate area for Gold Star families or other military families who have experienced loss. There’s a divide, even within communities that have each other’s backs in an enormous way – and there’s no community better than the veterans’ community with each other. But man, grief is still this really strange area, this taboo that I think is really tough for people to think about. And Bonnie, to her great credit, used her loss as a springboard to be there for others who are in that same situation. It’s incredible what she’s been able to build.

Allison: I’m sure you get asked to lend your voice to many charities. Why first responders and the military?
Jon: I’m drawn to supporting people who give of themselves so selflessly. It’s an unusual individual who, when you hear the sounds of trouble, actually moves towards it, rather than away from it. I’m generally in the “I just have to be faster than the least fastest person’ category.

I’m also struck by the stoicism within these communities. Members of the military and their families don’t often reach out for help when they need it. And I think too often we depend on them, and yet when the time comes for them to depend on us, we’re not there for them. So I try to help push along the idea that the least we can do for them is repay their service and selflessness with support.

Allison: Is there a TAPS program that speaks to you the most?
Jon: The mentor program. I think this initiative is especially important for the children left behind, for them to see someone who is like their dad or like their mom, who is in the military, who understands what they’re going through. There are little things that most people don’t even think about. For example, if a loved one is lost during service and the family lived on a base, that family doesn’t get to live on that base any more. As isolating as grief can be, that’s even more traumatic. So for TAPS to come in and provide a softer landing for people and a way to move forward is just amazing.

Allison: Is there ever a wrong time to laugh about loss?
Jon: Everyone deals with loss differently. Laughing is how I deal with it. And people always say, ‘What’s the right time?’ or ‘Are there times that are off limits?’ For me, for my family, no. Like, we will probably be joking in the midst of a death, during that moment. But everybody is different and that’s what’s so great about the TAPS Institute for Hope and Healing – it supports a process that tells people, ‘Hey man, there is no right or wrong way to do this. There’s no time frame. Embrace who you are. You’ll get through it that way.’

Allison: What still needs to be done to support 9/11 first responders?
Jon: People need to make it unacceptable for politicians to mess with them. They should write their Congressperson. The idea that we bring first responders and military families anything but peace and support is very upsetting to me. The government spends money incredibly frivolously in many different areas, and then we quibble over nickels and dimes when it comes to really important areas. I think providing grief support to military families — and truly any one who needs it — is a really important area.