What a thrill for me to feature actress Alysia Reiner in this Q & A! You no doubt know Alysia from her role as “Fig” in Orange is the New Black. She also stars in the movie Egg, alongside her husband David Alan Basche (The Blacklist, NCIS), Christina Hendricks (Mad Men), and Anna Camp (Pitch Perfect).

During our talk, Alysia revealed that her decision to sign on as one of the film’s producers was prompted, at least in part, by the death of her father. Our conversation is especially meaningful to me because not only have Alysia and I both lost our dads, but we also went to high school together. 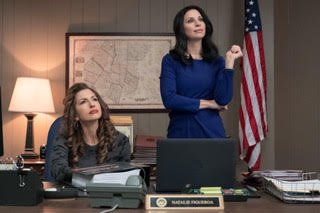 Allison: Thank you for giving me permission to share such a personal story surrounding your involvement in the film Egg. This is the first time you’ve mentioned publicly that part of the reason you joined the project is to honor your father’s memory. Why would this movie have meant so much to him? How much of your work as an artist has been influenced by losing your dad?
Alysia: My dad so wanted to be a producer and I feel like I may not have had the courage and desire to make my own work had he not died, sparking my desire to create to honor his memory. I also love that in producing I have the opportunity to hire more women and make a difference that way.

Allison: What one memento reminds you most of your father?
Alysia: The card he wrote David and me on our anniversary. David had it framed with a picture of my dad and me at our wedding. It’s one of my most prized possessions.

Allison: Where did you put it?
Alysia: It’s in our guest room on the second floor. You see it the moment you walk in. It welcomes you, and everyone comments on it. In a way, he’s always here with us. It brings me so much joy to share that story with you.

Allison: Have you ever “repurposed” an item that belonged to your father (e.g., taken a cufflink and made it into a charm for a necklace, or taken clothing to sew into a quilt)?
Alysia: What a great idea! But not really – I do wear some of his shirts and David wears his watch.

Allison: Being proactive about remembering loved ones drives resilience and sparks happiness. Have you found this to be the case?
Alysia: Absolutely! We traveled to Paris – my dad’s favorite city. It was a doubly joyful trip because it was a direct way for me to connect with him, and for my daughter to connect with her grandfather. And before we left, out of the blue, my daughter Liv said to me, “Momma, can we open Grandpa Chuckie’s jewelry box tonight? I want to find something to wear or bring to Paris so he is with us.” That really made me smile.

Allison: What do you know now about keeping the memory of your father alive that you didn’t know when the loss occurred? How did you help Liv develop her own relationship with your dad? What can you share that readers could use as a template and inspiration?
Alysia: I think because both David and I lost our dads, it’s always been really important for us to share stories about each of them with Liv. I also sing a song about angels watching over her every night (even at 10!). When she was smaller, I would specifically talk about Grandpa Chuckie being one of those angels. She always felt like he talked to her and tickled her in her sleep. She has her own relationship with him even though they never met. (To learn more about how Alysia and David keep their fathers present in their lives, read this post.)

Allison: Loss is a great teacher. In what way have you derived greater joy and meaning from life following loss? Do you live more in the moment? Are you more compassionate? Do you focus more on what’s really important and less on what’s not? Has it fueled creativity or driven you to a new purpose?
Alysia: There are so many unexpected ways loss can bring deeper joy. I think if we allow it, it cracks us open. It makes every moment a bit more precious and sweeter because we know tangibly that it can truly be taken. Additionally it has made me risk more and be willing to fail more because I know on a deeper level that I would prefer to try and fail than regret not trying.