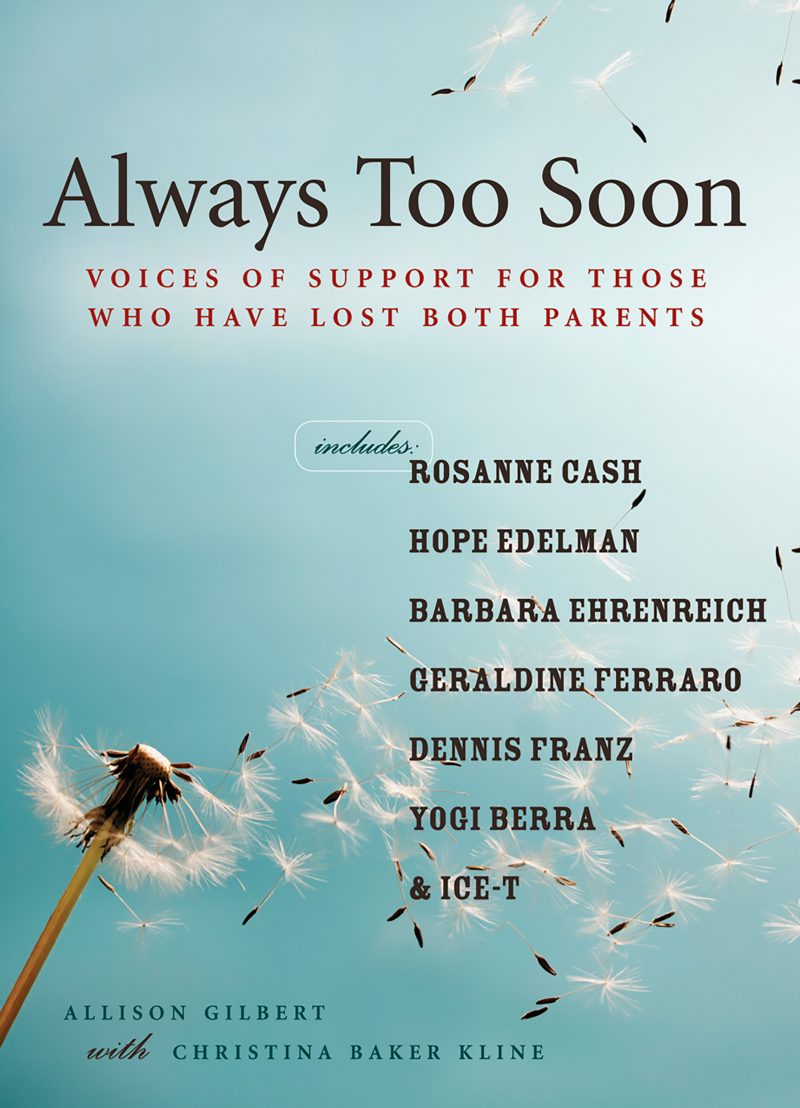 Losing one’s parents is a universal experience. Whether it happens suddenly or over a long period of time, whether it happens when one is younger or older, no other life passage is more profound. This intense loss presents a seismic shift in one’s perspective on life, career, and family.

Always Too Soon is a collection of intimate interviews about coping with this loss and the journey traveled to move beyond it. Allison Gilbert, herself parentless by 31, powerfully lends voice to the private heartache, regrets, and even relief that accompany pain and healing.

This compelling collection features perspectives from well-known figures as well as the experiences of those who lost their parents to events we remember – the Oklahoma City bombing, the crash of TWA 800, and the September 11 terrorist attacks. Interviews include:

“The collected short memoirs are all quite moving… and will strike a chord with those who have lived through the deaths of one or both parents.”
— Publishers Weekly   (read full review)
“Heartbreaking and powerful.”
— The Journal News
“This book is a comfort to anyone who has ever lost a parent. In 2000, I lost my father, and two years later, I lost my mother. I was lucky to have them with me into my fifties. Others aren’t so fortunate, but all endure… Each story here eloquently captures the heart of loss. The lessons, forged from sorrow and eventual acceptance, are invaluable and intensely real.”
— John Kerry, Special Presidential Envoy for Climate
“I wish I’d had a copy of Always Too Soon after my own parents died. To find oneself orphaned in middle age is a curious thing: You feel deserving of only the mildest form of sympathy, yet privately the sorrow is deep. The stories in Allison Gilbert’s new book offer proof that no matter how old we are when we lose our parents, it is a singular kind of grief. The essays reveal how others have made their way into the new life that each of us must construct for ourselves once we are no longer anyone’s daughter or son.”
— Caitlin Flanagan, staff writer at The Atlantic and author of Girl Land and To Hell with All That
“After losing her second parent in her mid-thirties, CNN producer Gilbert searched bookstores for accounts of other adult orphans. When she came up empty-handed, the seeds of this book were sown, as she began interviewing a wide variety of celebrities and regular people who lost parents to tragedies like the crash of TWA Flight 800, drunk driving, the Oklahoma City bombing, and the 9/11 terrorist attacks. Particularly evocative are the contributions from rapper/actor Ice-T, singer/songwriter Rosanne Cash, and social critic Barbara Ehrenreich. Included are selections by people who had difficult relationships with their parents, those who lost their parents as children, and some who candidly admit to having valued one parental relationship over the other. This often heart-wrenching collection of voices should provide the type of textual “support group” formerly absent from the literature of grief.”
— Library Journal
Read a Q&A with Allison about writing Always Too Soon Join the Parentless Parents community on Facebook
©2022 Allison Gilbert. All rights reserved.  |  Privacy  |  Site by Example7
Top